When you are looking for a soup that isn’t heavy but isn’t light, either, roasted corn and pepper chowder is a great choice. It pairs well with a salad and whole grain bread.

Over the years, I have made this recipe with red, yellow, and orange bell peppers. Orange is definitely the best choice. Yellow peppers just blend in and you can’t tell there is pepper in the recipe at all. Red just doesn’t taste as good as the orange. I have doubled the recipe and used 1 red pepper and 1 yellow pepper with really good results, though.

If using frozen corn, be sure to set the bag out of the freezer in plenty time for it to thaw. If using fresh, cut kernels from cob. 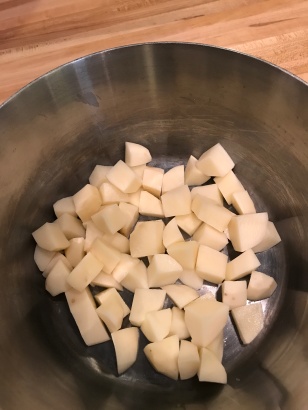 While the oven is heating, peel & dice 1 large potato.

Add 4 cups of vegetable broth*, salt, pepper, celery salt, and onion powder. Cover, and bring to a boil. Once it is boiling, reduce heat to a simmer.

*I use 4 teaspoons of vegetable Better Than Broth with 4 cups of water. It has great flavor and takes up a lot less room than the several quarts of broth that one jar makes.

Once the oven is up to temperature, spread corn on a baking pan and place in oven for 25-30 minutes.

While the corn is in the oven, wash and deseed 1 orange bell pepper and 1 poblano pepper. Place on a sheet pan that is covered with foil. Press peppers with palm of your hand to flatten.

When you take the corn out of the oven, move the rack to the highest rung and turn oven to broil. Place the pan with the peppers under the broiler.

Using a spatula or large spoon, transfer the corn from the pan to the pot that is cooking on the stove.

When the peppers are blistered, remove from oven and place in a ziplock bag. This will loosen the skins and them easy to remove.

While the peppers are cooling, take about half of the broth, corn, and potatoes from the pot and into a blender. Do not blend, yet. This step allows the soup to cool a bit so that you don’t get burned when you do blend.

(If you are doubling the recipe, you will want to blend in 2 batches. Place part in the blender & part in a bowl.)

After about 10-15 minutes, remove peppers from bag and remove their skins. Place in the blender and blend. Return to soup pot. Add 1 cup milk.